The Polar Vortex is "Snow" Joke

EnviroTech Services, Inc. is prepared to provide superior deicing and anti-icing products all winter long. This winter might be a little longer than normal due to a weakened polar vortex.

A polar vortex is a large area of low pressure and cold air that consistently surrounds the North and South Poles. It is considered a ‘vortex’ due to the counterclockwise flow of air that keep the cold area near the Poles (US Department of Commerce). Currently, temperatures have spiked at high altitudes above the North Pole, which is known as a sudden stratospheric warming event, and consequently weakened the polar vortex (Freedman).

“If the polar vortex is strong and stable, as it was last winter, that cold air will stay bottled up over the Arctic, and snow chances may be few and far between for regions such as the Mid-Atlantic and Northeast.

But when the polar vortex weakens and wobbles off the pole, pieces of it can split off and swirl southward, affecting the United States, Europe, and Asia. And that is exactly what’s begun to happen, due in large part to this stratospheric temperature spike” (Freedman). 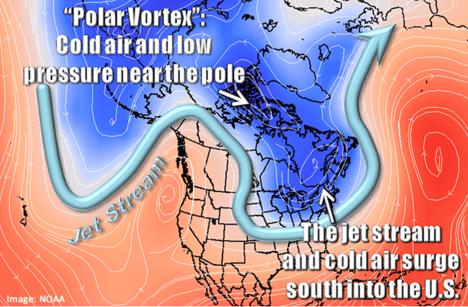 An example of a deep trough nudged south by the wobbly polar vortex.

The length and severity of the current weak polar vortex is not entirely known, but regions across the United States should prepare for record low temperatures. According to the National Weather Service, there were nearly 160 million Americans under a winter weather alert on February 15th, 2021.

Additionally, over a third of the country experienced below-zero temperatures, and more states are expected to see similar temperatures. In some areas, it will be so could that boiling water will flash freeze and frostbite could occur within thirty minutes (CNN).

The Midwest could experience temperatures as low as -25°F and highs that are 15°to 20°F below normal. On top of the cold air, the Midwest could see wind chills anywhere from 20° to 30°F below zero! “In fact, 16 states across the Midwest and Northern Plains will experience temperatures below zero on Monday morning. That covers 16% of the country and 41 million people” (CNN). In the Mid-Atlantic and Northeast, temperatures are unlikely to get above freezing for the rest of the week. 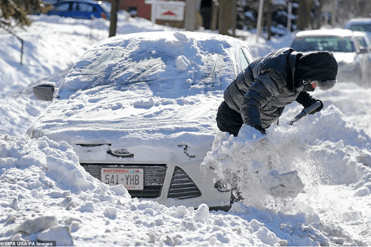 Even if you live in an area that typically experiences cold temperatures, it is strongly advised to dress in heavy layers and avoid being outside for extended periods of time.

Don't let late winter storms catch you off guard. Learn about the superior deicing and anti-icing treatments from EnviroTech Services, Inc. by visiting our website or speak with a representative at 800-369-3878

CNN, Jennifer Gray. “Every US State Will See Below Freezing Temperatures over the next Week.” CNN, www.cnn.com/2021/02/02/weather/polar-vortex-forecast-freezing-cold/index.html. Accessed 16 Feb. 2021.

Freedman, Andrew. “The Polar Vortex Is Splitting in Two, Which May Lead to Weeks of Wild Winter Weather.” Washington Post, www.washingtonpost.com/weather/2021/01/05/polar-vortex-split-cold-snow/. Accessed 16 Feb. 2021.

US Department of Commerce, NOAA, National Weather Service. “What Is the Polar Vortex?” Weather.gov, 2014, www.weather.gov/safety/cold-polar-vortex.