AMP® is one of EnviroTech’s latest product releases and it brings technical innovation and outstanding product quality to the salt brine additive market. Salt Brine is a great tool for snowfighters, as it can be used for pre-treating, deicing and anti-icing. But salt brine alone has some very detectable performance limitations: 1) salt brine is prone to drying out and being blown from the surface by the wind, 2) the melting point of salt brine is often not low enough to be effective in many storms, and 3) salt brine is among the worst options in terms of the corrosion it will cause. 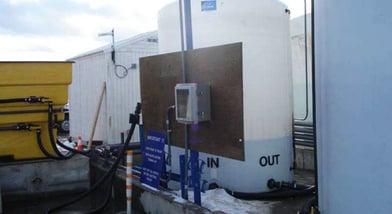 AMP® is designed to respond to each of those limitations by:

1) it’s tackified, increasing how effectively the product bonds to the surface and thus preventing it from being blown from the surface by wind after pretreatment,

2) boosting melting power by lowering the product’s freezing point (1:1 ratio) from 18℉ to 11℉, and

3) decreasing corrosion by over 70% compared to salt brine alone, which places the product on the PNS – QPL (Pacific Northwest Snowfighters - Qualified Product List).

Another important attribute, is the opportunity to lower salt usage and introduce less chlorides into the environment as a result. AMP® has undergone extensive testing to validate its effectiveness and clearly define the best utilization of the product. Below are case studies from some of our customers that demonstrate how they used AMP® to improve their service levels, reduce costs, and reduce chlorides introduced into theenvironment. Download the AMP® brochure from our website and contact us to learn more about how this innovative product can enhance your deicing and anti-icing program.

The Problem: Finding an Easy to Use Salt Brine Additive with Better Performance

Across the U.S., in the 2016-17, communities experienced varied winter weather conditions. With extreme snowfall, in the Northwest compared to relatively light winter conditions in the Rocky Mountains and a light to average winter conditions in the Midwest. A Commercial Landscaper in North Dakota, Cities and Counties in Minnesota and a municipality in Washington were just some of the organizations that tried AMP® in the latest winter. 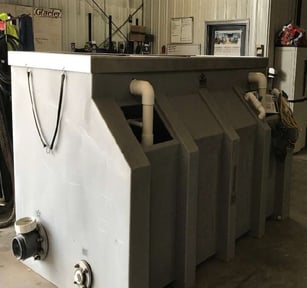 Glacier Snow Management Company started using AMP® as a way to continue Liquid Treating surfaces, but at a lower cost than with an inhibited Magnesium or Calcium Liquid Brine when temperatures are not extremely low. AMP was added by volume to the Salt Brine that was made using a purchased Salt Brine System.

During this last winter, AMP® Enhanced Salt Brine was used numerous times by Glacier at sites such as hospitals, retirement homes, and commercial business campuses. started using AMP® as a way to continue Liquid

Treating surfaces, but at a lower cost than with an inhibited Magnesium or Calcium Liquid Brine when temperatures are not extremely low. AMP was added by volume to the Salt Brine that was made using a purchased Salt Brine System. During this last winter, AMP® Enhanced Salt Brine was used numerous times by Glacier at sites such as hospitals, retirement homes, and commercial business campuses.

“Glacier has used EnviroTech products for 10 years now and we have always been impressed with their products and new innovations. This year we purchased a brine maker and we are currently using brine for anti-icing and supplemental deicing. Our concern with using brine in our geographic location is with the extreme low temperatures we deal with (the possibility of refreeze). This dilemma kept us from going to straight liquids for some time now. But, after spiking our brine with 10% AMP®, we were truly impressed with the results. We were even using the brine for deicing at temps down to 10 degrees below zero air temperature. AMP® gave us the peace of mind to use brine for more the just anti-icing.”

City of Auburn, Washington, used AMP® to enhance their salt brine, 5 times this past winter as pre-treater, anti-icer, and as a deicer. The city opted for a 10% AMP® Solution, but may at a later date increase the dosage to 20% AMP® if it is decided that they need to have a PNS Approved corrosion inhibited product or a salt brine solution that works at even lower temperatures. The City of Auburn WA chose to add the AMP® via a metering pump after producing the brine. The payoff for using AMP® Enhanced Salt Brine was the decrease in application rates. This means less chlorides in the environment as well as a reduction in application costs.

Another customer, the County of Anoka in Minnesota also opted for the benefits provided by a 20% AMP® + 80% Salt Brine solution to give them a product that works as pre-treater and as an anti-icer. The County of Anoka Minnesota authorities had used a beet juice product in the past with their salt brine. Moreover, the County’s switch to AMP® worked extremely well, with no separation seen in the brine solution along with no odor or suspended solid issues that often seen with beet juice derived products. Anoka County was very pleased with the performance of the product after using it about 10 times this past winter.

For all of these customers, AMP® was the favored solution whether it was being used at 10% or 20% add rates, whether it was being used for pretreating salt to reduce bounce and give the salt a little more bite, or if it was being used as an anti-icer to pre-treat ahead of a storm allowing the customer to more easily remove snow from the pavement. As you read in the case studies, AMP® is also often used as deicer to clear the snow and ice from sidewalks, parking lots, and roadways. These organizations as well as numerous others throughout the country found that utilizing AMP® in their salt brine allowed them to have a cleaner/easier to use additive (without the odors or solids seen with Beet Juice), gave them a product that was easy to blend, offered lower corrosion rates and worked at lower temperatures. The product can help reduce chlorides by up to 75% due to the improved effectiveness of the product (AMP at 20% has 75% more melting capacity than salt brine alone).

For more than twenty-five years, EnviroTech Services, Inc. has forged its identity as an innovator and industry leader in road solutions. We effectively produce high performing products that provide our customers with improved efficiency and reduced cost. We achieve these goals while, at the same time, reducing environmental impact and enhancing sustainability.