For winter maintenance agencies and contractors, snow and ice control is a vital function of their work providing safe conditions for the public. Using an innovative product that reduce costs, improves safety, and mitigates environmental impacts is increasingly important. 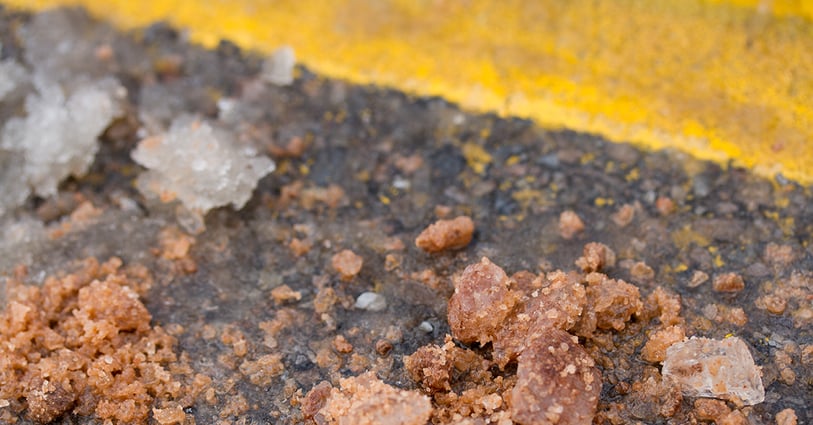 Currently, the U.S. spends more than $2 billion every year on snow-and-ice control, and applies more than 20 million tons of various salts to the nation’s roadways. If you take a look at the budgets of these agencies, incredibly a majority of their budget goes for buying rock salt.

Traditionally, road agencies have used sodium chloride (NaCl), predominantly as mined rock salt and to a lesser degree as solar evaporated salt for snow-and-ice-control operations. However, a better product exists that can help agencies and contractors reduce costs and lessen impact to the environment. The product has been with us for over 300 million years; it is a complex red salt that contains sodium chloride, calcium chloride, magnesium chloride, potassium chloride and beneficial inert ingredients such as clay.

The performance characteristics can help agencies and contractors refine their winter maintenance operations by optimizing material use, optimize the timing of applications, and reduce reapplication rates or frequency. Some of the Performance improvements include:

“Since we started using Ice Slicer exclusively in 1999 we have had up to a 75% reduction in material use and approximately a 50% savings in snow fighting costs per storm. We also use Ice Slicer on our parking lots and sidewalks and have had no adverse effects to our grass or plants. In general, I think everyone is pleased with Ice Slicer including the citizens.”

“(We) used Ice Slicer in very limited quantities until severe downsizing took place between 2008 and 2010. You might think this would mean reducing our use of Ice Slicer. However, as a cost savings measure the decision was made to actually increase our usage. We changed over many of our 54 snow routes to Ice Slicer routes and applied the material at 150lbs/ lane mile. Most of our arterial streets are now treated exclusively with Ice Slicer. The results are miraculous and enable us to get onto other routes much quicker.”

“We went from 33% over budget to 17% under budget when we replaced white salt with Ice Slicer!”

As a Hypothetical example:

The City of AnyTown USA can get Rock Salt delivered at a cost of $25/ton, and alternately Ice Slicer would cost $50/ton delivered. The city uses 400 lbs. of Rock Salt per lane mile to de-ice, while the City could be using 150lbs. of Ice Slicer per lane mile instead. This alone results in a Savings of $1.25/lane mile. Let’s say the city has 100 miles of two lane road to maintain, this is a savings of $250/storm. In addition, there would be a 17% reduction in Truck Fuel usage and mileage (wear and tear). Of course there would also be less hours to pay snowplow drivers by an estimated 20%.

Therefore, this City of AnyTown USA could be saving more than $350/storm in Fuel & Mileage alone.

Let’s say the city has an average of 18 storms per year, this equates to more than $6k /year in direct savings (deicer, fuel, mileage, and driver hours). This can be seen in the Table below…

And on top of this, you are using less than 1/2 of the product which is much better for the environment and better for the roadways as there is much less product to cause corrosion.

Discover the deicing power of IceSlicer for yourself! Contact us for more information or to order today.