Ensuring the safety of motorists and passability of roadways in the winter months is critical in many regions of the country. Some of the most useful parts of the toolkit many municipalities use to ensure roadway safety are deicing chemicals such as granular rock salt, salt brine, magnesium chloride, or calcium chloride. These chemicals function by effectively lowering the freezing point of water. Deicers can be used before a storm to prevent snow and ice from bonding as solidly to pavement and improve the effectiveness of plowing. Typically, this is called “anti-icing” and brine's are predominantly used in this capacity. 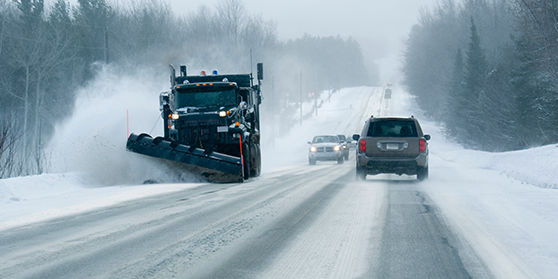 When chemicals are applied after a storm, the Snowfighter is typically said to be “deicing” or trying to actively melt snow and ice already present to allow for better removal. A truly effective program will utilize brine's and granular products both before and after the storm when necessary in order to allow for rapid removal of snow and ice from a byway. There are a myriad of different products currently on the market and being released every year that claim greater and greater ability to melt snow and ice. But this begs the question: how would a consumer know which deicer is the highest performer? Currently there is no objective and scientifically sound way to answer that question.

When it comes to deicing a roadway, or removing snow and ice that has already accumulated, it is instructive to think about what a Snowfighter is trying to accomplish. It is true that, in essence, they are trying to remove snow and ice. But what is the ultimate goal of removing snow and ice? The answer to this most fundamental of questions, is that the Snowfighter is attempting to improve the friction of the road surface. Without good friction, or “grip”, an automobile will find it very difficult to transverse the roadway. Poor friction is the cause of a vast majority of crashes and fatalities on winter roadways.

A higher level of grip, or friction is achieved based on the amount of contact between the rough road surface and the textured surface of the tire. Tire manufacturers have long understood that accident avoidance would in very large part need to start with friction. This is why tire engineering and science has developed so much in the last 90 years. Rubber chemistry has also been a large area of investment for these companies as they try to improve performance, grip, and tire safety.

Friction is a concern when designing roadways as well. There are a myriad of different concrete and asphalt designs on the market to improve friction in different scenarios. Highway engineers understand the importance of optimum friction on a roadway and test during construction often to ensure proper levels of friction. The ASTM Method E-274 (AASHTO T-242) is practiced by 39 States and the territory of Puerto Rico as a U.S. standard method for skid resistance of paved surfaces and uses a full-scale tire.  Skid resistance is the force developed when a tire that is prevented from rotating slides along the pavement surface.

Since the ultimate goal as mentioned above for a winter maintenance operation is to return good friction to a road in the most expedient manner possible, it follows that the most important characteristic of a deicer would be how well it can achieve that goal in the quickest manner possible. EnviroTech Services, Inc., in conjunction with the Western Transportation Institute (WTI) at Montana State University has pioneered a laboratory method of determining how well a deicer performs at rapidly recovering friction on a roadway.

Proof of concept was created at EnviroTech Services, Inc., in Greeley, Colorado with a small-scale machine consisting of a simulated road surface cooled by three electric heat engines. This surface was capable of oscillating back and forth with simulated traffic applied to the surface and a friction sensor was aimed at the center of the surface (see Figure 1). Water was applied to the road surface, it was then frozen, deicer was applied, and friction could be observed to improve as the salt melted the ice. This proof of concept instrument provided some relatively repeatable data for granular deicers. The issues with this design arose with the fact that it would not be a representative test since the air temperature in the room was not controlled to coincide with the cooled road surface. The trafficking action was also supplied by simple hockey pucks which did not very accurately simulate the downforce that would be applied by a true car tire. To truly control all variables and simulate a winter roadway in a precise manner required the scope and quality of facilities found at WTI.

Initial work performed at WTI involved a cold room able to maintain very precise air temperatures. WTI was in possession of a machine built for a previous study which was an ideal starting point for collaboration. The machine was equipped with an oscillating table, a tire capable of producing realistic down forces on the table, and a slot for placing road surface samples under the tire. Placing the machine in the cold room over night allowed it to reach the same temperature as the air. EnviroTech Services supplied a friction sensor to begin to try to replicate proof of concept data in this improved environment. Unfortunately, the design of the machine did not allow for constant measurement of the pavement surface as the sensor was not able to maintain a constant view. However, the work done allowed for an ideal design to be conceptualized and a path forward to be determined.

Figure 3. Close up view of table and road surface on trafficking machine. Sensor is being manually aimed at table for friction measurements.

EnviroTech Services is currently in the process of building a newly designed and purpose-built machine specifically for measuring friction on roadways featuring an oscillating sensor mount, oscillating table/road surface, and two full size passenger tires capable of applying realistic downforces to the road surface. Once construction has been completed, this machine will be donated to WTI and Montana State to be used to develop an objective third party method to quantify how well and how quickly different highway deicers recover friction in realistic conditions. This will allow Snowfighters the best information when choosing a chemical to use on their roadways and demand a higher standard from deicing companies, all resulting in safer roadways in cold winter months.

EnviroTech offers several high performing deicing products including granular deicers, liquid anti-icing additives and liquid deicers.  One granular product in particular, Ice Slicer, provides industry leading performance in terms of returning a road more quickly to a safe level of friction.  The Ice Slicer product allows customers to apply less material thereby reducing total costs, minimizing carbon footprint, reducing chlorides introduced into the environment, and all of this while improving road service levels.  Ice Slicer, as a multi chloride, provides improved performance from a naturally mined product with no chemical additives that can leach out causing storage problems.   Many of our customers use a combination of liquid and granular anti-icing and deicing solutions and we have the entire portfolio of products to meet your needs in this area including our salt brine additive, AMP, that allows you to meet the PNS standard for corrosion reduction while also tackifying the solution so it sticks to the road for anti-icing.  Additionally, we have liquid deicer formulations that are optimized to meet your specific needs.

For more information about our Ice Slicer product or any of our liquid deicing or anti-icing solutions click below: